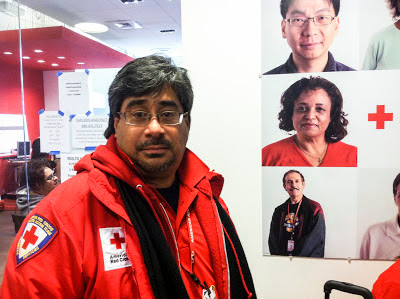 Miami Red Cross volunteer Roberto Baltodano’s first experience with the Red Cross was as a recipient of Red Cross aid during Hurricane Andrew in 1992. When Andrew hit South Florida, the roof of Baltodano’s South Dade house was destroyed.

With no work for two to three weeks due to a post-Andrew power outage, rather than sit at home doing nothing, Baltodano joined the Red Cross as a volunteer Emergency Response Vehicle (ERV) driver.


“I remember an ERV coming to our neighborhood and feeding us the meals that we’re feeding today in New York,” he said. “So I’ve been on the other side of that window. I was a client.”

When Baltodano was laid off a year and a half ago after 25 years in the financial services sector, he decided to increase his involvement with the Red Cross and become a full-time volunteer in Miami, specializing in disaster mass care, or feeding.

When the East Coast went on alert for Hurricane Sandy, Baltodano was part of an advance team stationed around the NY region, ready to coordinate the deployment of Red Cross ERVs in the wake of Sandy.

After the storm, Red Cross vehicles were deployed to the New York region from across the US. Some of the first to arrive were from Tennessee, Kentucky and Mississippi. As the full scale of the disaster became clear, the Red Cross’s full, nationwide contingent of 320 emergency vehicles were sent to the storm-hit region; 180 are now in operation in the New York area.

Baltodano’s first role in the relief effort was to coordinate sending six Red Cross vehicles, stocked with 57,000 heater meals, to Long Island—one of the first meal deliveries of the relief operation.

Baltodano has been on the job for almost three weeks now, and recently became involved in the procurement side of the relief operation. He visited a shelter in Bohemia, N.Y., which was housing around 50 to 80 local residents. While cots and blankets were well stocked, food and other supplies were running low. Baltodano arranged for milk, oranges, essential foods and baby supplies such as Pampers, to be delivered.

Three weeks on a disaster relief operation brings a variety of experiences. At the beginning, many Red Cross volunteers were staying in shelters.

“There were two of us sleeping at a high school the first day,” Baltodano recalled. He said it was spooky staying all alone in a high school around Halloween.

After that, Baltodano spent several nights in a staff shelter, moving to a hotel when he began working out of Greater NY Red Cross HQ in Manhattan.

“For the most part though,” he said, “our ERV teams and the people working in the kitchens are staying in staff shelters.”

Having a hot dog in New York; it’s something normal

“When I began we didn’t have the quality of food we have today,” he said. “We had MREs; military ready-to-eat meals.”


Today, the Red Cross works hard to provide meals that will make people feel comfortable and remind them of home. The inclusion of salads and vegetables ensures that meals are healthy. A few days ago here in New York, the Red Cross was serving up hot dogs.


“We adapt our meals to each region.” Baltodano explained. “We need to help people get back to normal. And having a hot dog in New York; it’s something normal.”

On this relief operation Baltodano finds it rewarding to sharing the knowledge he’s gained through the years with new Red Cross volunteers. Baltodano explained to the many new ERV drivers that they would see a lot of emotions during the days ahead and that people would be crying on their shoulders. He advised his new colleagues to visualize such situations ahead of time so that they would be mentally prepared.

“It allowed them to be stronger and to be able to help the client,” he said. “Not only be handing them a plate of food, but being the pillar of strength they needed to be.”

“Whether it’s for a fire that happens every nine minutes across the U.S., or for a hurricane that may not happen for the next 100 years, you should always be prepared," he said. "And to be involved in volunteer work is the best way to learn preparedness."

Baltodano has just signed on for another three weeks of Red Cross Sandy relief work.

Posted by nyredcross at 4:36 PM

Email ThisBlogThis!Share to TwitterShare to FacebookShare to Pinterest
Labels: Across the Country, Down the Street, Hurricane Sandy