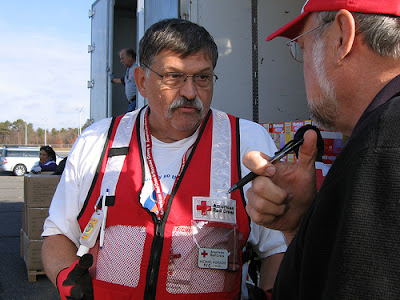 
Mike Hoplight is a super volunteer for the American Red Cross. So far this year he has been deployed for duty away from his Sanborn, New York, home for a total of 159 days. Currently, he is the Site Manager for the large distribution center on Long Island that provides bulk supplies for persons affected by Hurricane Sandy. He has been in charge of this site for the past 29 days, having arrived well in advance of the storm to receive and be ready to supply needed items for the storm victims.


“I’ve been deploying all my life for various operations, and I’ll be here until this operation is done,” said Hoplight, “but I would like to get home to be with my wife and daughters for Christmas.”

Hoplight is retired from the United States Army and volunteers extensively for the Red Cross: He serves as the Sheltering Lead for the state of New York and also does a great deal of volunteering for Red Cross Service to the Armed Forces. Just prior to deploying in support of Hurricane Sandy, Hoplight was in Afghanistan working for the Red Cross.


His current mission involves running the bulk distribution site and coordinating community organizations involved in the recovery effort, such as churches, food pantries, community centers, and in one case, even a home for orphan children. Approximately 100 volunteers are involved in the operation, mostly Red Cross workers, but also other volunteers, including members of the Teamsters Union.

Posted by nyredcross at 4:57 PM

Email ThisBlogThis!Share to TwitterShare to FacebookShare to Pinterest
Labels: Across the Country, Down the Street, Hurricane Sandy, Long Island