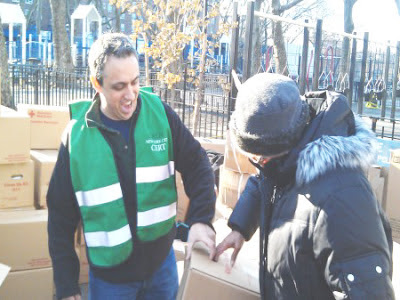 Among a sea of red-clothed volunteers handing out comfort and clean-up kits on Thanksgiving Day in the Red Hook neighborhood of Brooklyn, one man stood out. In his bright green vest, Devin Cohen, chief of the local Community Emergency Response Team (CERT), spent the holiday helping with the Red Cross relief effort, now in its fourth week.

Shortly after Sandy made landfall on Oct.29, Cohen managing a shelter for individuals with function and access needs. Almost three weeks later, he was still responding, this time in one of the hardest hit areas of Brooklyn, where scattered power outages still affect some brownstones, apartment buildings and local businesses.

“These days, it’s block to block,” Cohen said. “I was supposed to spend the day with my family, but we got an email asking us to send teams to help distribute food and supplies, so here I am.”

In the days and weeks following major disasters, it’s not uncommon to see CERT teams working hand-in-hand with Red Cross volunteers. More than 1,100 communities across the United States have local CERT groups, which aim to harness the power of local citizens to support first responders during emergencies. Local CERT volunteers have been trained to help bolster communities’ safety, security and preparedness in the face of natural disasters, among other emergencies.